The Last Week Of July Was A Weird One Maybe We Are In A New Normal? 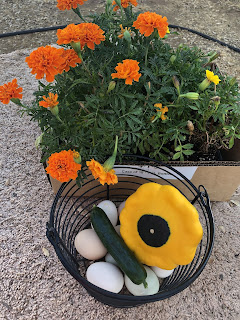 The week was pretty good up to Tuesday when it got way too busy . Something every day until today and I was just feeling "ADR" as Dr. D my long time mobile goat and what ever else you got vet would say. For those who are scratching their head that would be "ain't doing right." I kept plugging away as the weather would be fairly decent mid nineties with lows in the high sixties.
In addition to the once a day leave home for how ever long it took to get it done. Little stuff like picking up the repaired stock trailer to hoisting Sherman into the truck for a visit to the vet. Tuesday night at about 5:00 PM PDT an alert was issued for high winds, potential flooding and thunder storms for 48 hours. I had known I had a large hole in the hay tarp and figuring we don't get wet weather of any kind in the summer I back burner that nasty, dusty chore as far out as I could. Hay  Hey it is hot dealing even with tarps with  holes. So as I watched the thunder heads gather I am balancing on ladder in the wind trying to make the proper adjustments between gust and then applying the new bandaid tarp around the largest holes. All the time for hour and one half thinking stinking thoughts not of gratitude to the NOAA for not sending an alert out earlier. Finally got everything done and back in house while adjusting my cranky attitude and switching my intent to gratitude that even if it doesn't materialize that I won't be up at two in the morning climbing around in the dark because it sneaked up on us.
So how did that work? Dry. Even with another weather alert issued again we never got a drop . It apparently decided it liked the high country better and stayed in place with the bulk of it in Yosemite Park and elevations above that. 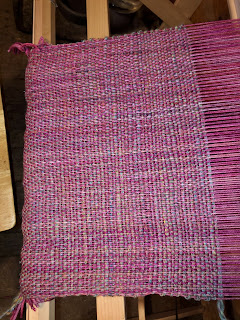 Once in awhile good intentions and plans do come together. This is one of those. Ya'll have listened to me whine and wiggle about jump starting my weaving. Getting back to that part of my life enabled me to go to a place that detoxed me. That took me on vacation without leaving home. Kind of like those middle of the night kidding's in the barn. I got started and stopped on the restart. Or sometimes I just had to vocalize it I guess to not let myself forget that once upon a time this fiber life fed a place in me through spinning, weaving , knitting and dying fiber that everything else in my life no matter how cathartic to my soul didn't touch. I finally decided to accomplish that goal was to buy myself a present. I bought a 36 inch rigid heddle Ashford floor loom. Technically a table loom but I purchased the floor stand so I could be more comfortable when seated in front of hit. So with this goal now in sight I found the best fiber with glitter and bling to jump start the project. The best part of this project is there was none. I just sat and spun daily until I had a pound of two ply  yarn done and figured that the project would revile itself in my minds eye eventually. 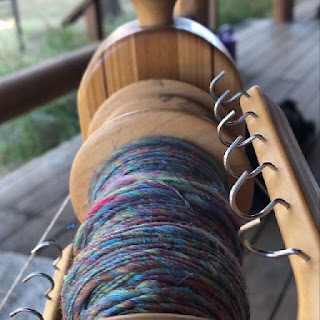 I will happily share the project now but not the recipient as I don't want the cat out of the bag. On the loom is a scarf/shawl . It will be when finished approximately 55 inches long and 14 inches wide. In addition a twisted fringe in the warp yarn will be added to each end. Which will add about 7 inches to the length on  each end. 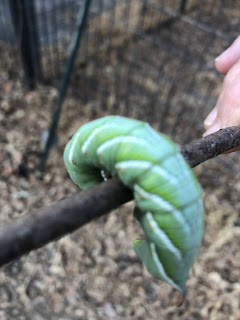 Let us cover as much territory as we can in this post. After all one never knows when I will become derailed by something that sparkles. Isn't he/she lovely? This is the year of the tomato worm apparently. I had none, nada , no last year. This year they are becoming plentiful. Bless their little squishy hearts. But I have to admit they are lovely. That is what the chickens said as I toss them over the fence to them.
Ah chickens that is the word. Another reveal in my world. My friend and I are going partners in the very first batch of meat birds on Walnetto Farm ever. Now the reason for that is I always knew someone who raised their own meat birds and would be happy to sell off extras to friends. So I couldn't see the logic in adding one more chore to my list. But I have bottomed out at the new location. Lots of folks doing it but not sharing. So my friend Jessica who I have known since she was two and her hubby are going in halves with me both in labor and $$. We will get 25 Cornish Boilers on October 14th and the grow is on. We will not be processing yet. Since this was a last minute act of insanity we choose to go with a processor who is available to us at decent rate and drop off in the morning pick up the next day. If all goes well we should be set up for processing the next batch in the Spring.
There are a couple of other potential items not quite to the reveal stage. I feel it best to QT these items just in case something changes in plans. So that gives you something to look forward to in the Fall. 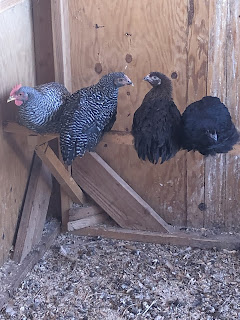 Cracker Jack and the pullets 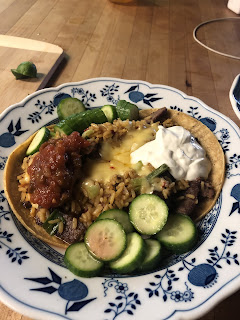 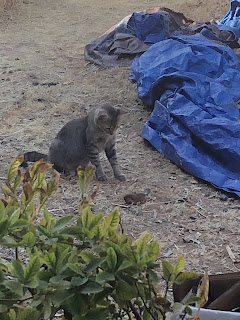 Miss. Kitty and the Gopher 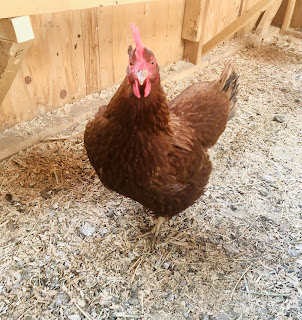 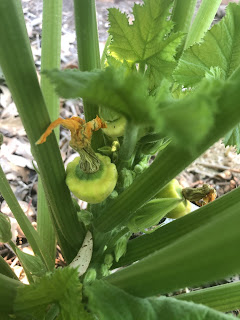 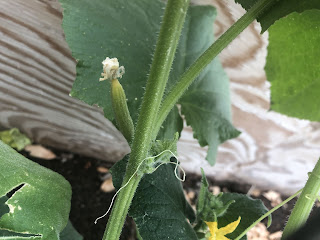 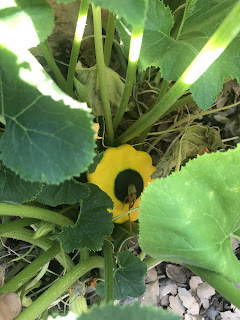 Isn't that always how it works? At least you got that dusty chore done! Ooooh, I cannot wait to see that scarf/shawl done - it is going to be beautiful! I have gone through my meat chicken phase and, although I miss the end result, I do not miss the process, so to speak. It's a good idea to have someone(s) sharing the work. We have been having severe thunderstorms almost twice a week and in between we have rain. Feast or famine, right? I guess the new normal is abnormal.

Indeed! Thank you and I hope the recipient feels the same way. I am ok with processing I just know what kind of $$ it will be to do it right for all the equipment. I may continue to go with having them done at the place down in the valley. It may work out if my friends want to buy the equipment for their future use as they are considerably younger and would get a good deal of use out of them. Then I would entertain perhaps buying all the birds from the hatchery every year in turn for using the equipment.

Well here we go. Went to bed to high humidity and thunder clouds minus the thunder. Awoken several times by my two panting dogs even though the windows were open and fans going. As I type at 9:30 AM it is 89 BUT feels like 87 (sounds like new math to me) and 28% humidity. Remember for us that is enough we are humidity light weights in CA.

What a great collection of photos. Good adjustment with the chickens. Dan keeps mentioning meat chickens, but I'm the one who drags her feet!

Regardless of how it makes it feel it sure to be exciting fun and educational.

Glad to see your finally getting to do some weaving! I think its great therapy. Takes your mind to other places. Just love the kitty with the gopher. Your garden loo quite healthy too! Take care!!

I agree about Miss Kitty with the gopher. Hard to tell who is more surprised. It got even more interesting later when Mama Kitty and Essy , Dudes sister, showed up. I think the gopher knew his time was limited.

More weaving coming on soon . Can’t wait for autumn and cooler weather for my autumnal plantings.

Glad you didn't get blown off the ladder!!! Your garden is coming along. Hope your chickens work out, nice to have the extra meat come spring!

Don't worry about getting "too old" to get the use out of the meat bird processing equipment. You will never stop with your wonderful zest for life and continued, abounding interest in all things available to you. Yay for getting your hands back in the fiber arts. I feel the same way about my handwork . . . of which there's been a severe lack these past few months. :o\ But the slower months are coming for all of us. Right? Right! Loved this post.

Are you okay down there?

Actually yes. Do you want most of us are doing getting garden changed from summer to fall stocking up on pantry items and freezer items counting when we can. My daughter-in-law is coming tomorrow for a visit we’re going to the county fair together and next week my third oldest granddaughter is coming for an overnight visit and we’re just gonna have fun. Sorry for not being around much

Try my darndest to do better take care

Welcome to Walnetto Farm in Sierra Nevada Mountain range. Established Summer of 2019 after returning to be closer to family after becoming a widow. Miss my crazy life on 42 acres in True Northern California but life is good!